Residency program sees growth as both professional and organizational.

LLUSP and LLUMC have worked in tandem to create residency programs built on adequate infrastructure and driven by current market requirements for the specialization of pharmacist training.

Students view the pharmacy residency program as an opportunity for professional growth. The clinical experiences within LLUMC provides pharmacy residents the opportunity to gain knowledge unattainable in most pharmacy settings. “I chose to come back to do a residency because I wanted to expand my clinical knowledge regarding the management of patients with a broad range of acute disease states. I also wanted to learn about pharmacy operations in the inpatient setting,” stated Ana Connor, PharmD, first year (PGY1) resident.

For Immanuel Ijo, PharmD, second year (PGY2) resident, the clinical setting of LLUMC provides experiential learning in a multidisciplinary setting, and the opportunity for professional growth by experiencing first-hand the patient-focused delivery of medical excellence across an array of infectious diseases. According to Dr. Ijo, learning comes through engaging with the team of pharmacists at LLUMC and direct patient care at the bedside.

Julie Thiry, PharmD, PGY1 resident, views the residency program as an opportunity to further develop and refine clinical skills as well as improve the decision making processes required to become a competent and autonomous pharmacist. Dr. Thiry is also looking for the opportunity to apply learned pharmacy skills across a wide spectrum of patients.

John Alpago, PharmD, PGY1 resident, adds “The reason why I chose to do a residency was to enhance my knowledge and confidence to become a proficient clinical pharmacist.” Dr. Alpago also stated that Loma Linda University’s commitment to develop the ‘whole person’ coupled with the wide variety of rotations was important to his choice of pharmacy residency programs.

Currently, there are eleven pharmacists working in the residency program. However, “further expansion is always a discussion, our departments are large enough to allow for further growth,” stated Dr. Carl Dominguez, Pharmacy Residency Coordinator and Assistant Professor. 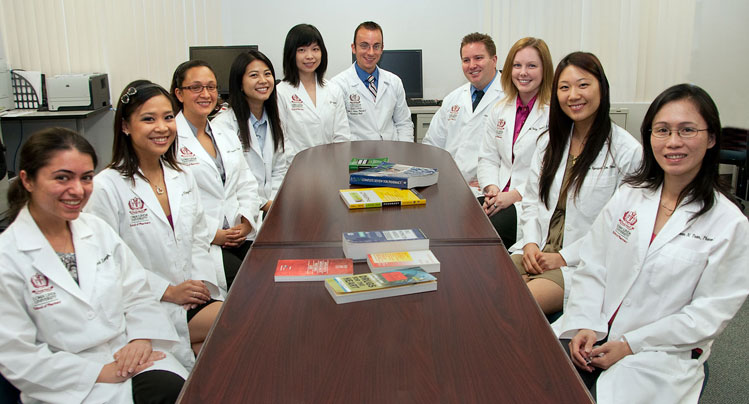